The Creolisation of video games.“If we are to preserve culture we must continue to create it 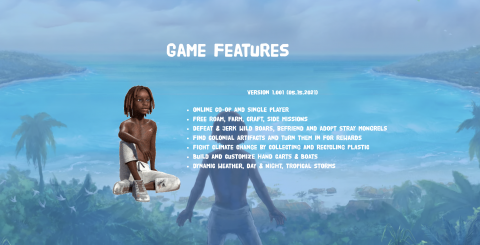 “If we are to preserve culture we must continue to create it.” - Johan Huizinga, scholar on the relationship between play and culture

Caribbean culture and that of small island nations like Antigua and Barbuda, risk losing their culture if it is not continually recreated in various forms. This includes books like those of Antiguan Joanne Hillhouse, to the theatre by playwright, Zahra Airall, to film by Howard and Mitzi Allen. Each of these has a place in the preservation and generation of Antiguan culture.

Games as a reflection of culture

Yet, there is one medium that is often overlooked in the multimedia landscape of cultural production. That is games - video games in particular. Any game, be it digital or otherwise, reflects in some way, its surrounding social dynamics. Take the game of Monopoly which reflects American capitalist society. Or look at the traditional game of Warri played in Antigua. It reflects the ancient roots of West Africa from which many of us in the Caribbean are descendants.

Although not the traditional form of storytelling, video games, like any other game reflect the culture in which it was forged. Video games, however, get a bad rap, because the associations we give to them such as encouraging antisocial and sedentary behaviours and lifestyles. However, video games provide a particularly unique opportunity to incorporate elements of Caribbean culture through their unique method of interactive narrative during gameplay.

A case of ”Street Boy”
One example of this is “Street Boy” a game being developed by Jamaican brothers Akeem and Tyreik Pennicooke. Pitched as Jamaica’s first cultural video game, it tells a positive interactive story of a young Jamaican boy living in rural Jamaica. Full of familiar sights like breadfruit and ackee trees, tins of Grace corned beef for meals, and brands like Supligen as a quick meal replacement drink, the objects within the game reflect Jamaican daily life. A wooden pushcart takes the “Street Boy” character, Arlington, of brown skin and dreadlocks all around his village as the player navigates the tropical and picturesque world inspired by Long Bay in Portland, Jamaica.

The Creolization of Technology
It can be imagined that games like these are what Dr. Curtis Charles, the director of academic affairs at the new University of the West Indies (UWI) Five Islands campus in Antigua, wants to encourage. In the Fall semester of 2021, the university will introduce a new undergraduate degree called eSports and Gaming under the newly formed School of Science, Artificial Intelligence and Computing. Under this school, Dr. Charles aims to creolize technology. This means taking technology that exists and putting our own spin on it to reflect and suit our Caribbean contexts.

Telling our own stories that relate to future generations
Instead of consuming the narratives of predominantly North American cultures, we as Caribbean people can tell our own stories, assert our own values and preserve our culture and history in interesting and innovative ways. So what would happen if video game developers from across the Caribbean, especially those in the OECS, began making their own games that incorporated, challenged and reimagined existing

Caribbean and small island culture?
Hopefully in the next few years as graduates from the UWI program begin to emerge, we’ll see a new way of producing and expressing our Caribbean culture that connects our stories and way of life to younger and future generations.