The impact of Caribbean anti-vax protests 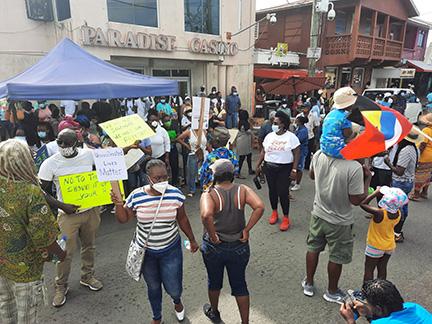 It’s happening in countries all over the world. There are large percentages of national populations that are resisting taking the COVID-19 vaccine, regardless of supplier. The Caribbean hasn’t been immune to this and it has made even Antiguans, some of the more placid people in the Caribbean, take to the streets in protest of increasingly widespread requirements for full vaccination. Across the region, including Barbados,  St. Vincent and Grenada, there has been resistance against taking the coronavirus vaccine.

The resistance is strongest in islands that haven’t had as severe a lockdown as others have. Persons in countries like St. Vincent and the Grenadines, which barely had a lockdown, haven’t seen the need for vaccines and therefore are resistant to them. On the other hand, Trinidad and Tobago, as well as Barbados, and Antigua, which have had stricter lockdown measures, seem to have a more positive uptake in the vaccine. However, regardless of the vaccine update, there still remain populations within each country that oppose the use of the vaccine.

This resistance has come in various forms. In Grenada, it came in the form of persons engaging in “jabs” on the roadside in place of carnival “jab jab”. Individuals go out on the road with their own music boxes playing soca and dancing with a little rum in hand. In Barbados, persons took to the streets in a peaceful march. In St. Vincent and Antigua, however, resistance took a more violent turn. In St. Vincent, Prime Minister Hon. Ralph Gonsalves, got hurt from a rock that was thrown at him during a protest. A week later, protesters in Antigua faced tear gas and rubber bullets as the police attempted to disperse the protesters.

What makes a protest illegal

It’s important to note that in each of these cases of resistance, covid-19 protocols were not adhered to and in some cases, the demonstrations were possibly illegal. Ilegal in that they did not follow police directives for carrying out the protests and demonstrations. Protesters in Barbados, for example, went off route and as that happened there was speculation on whether things would escalate. Fortunately, the Barbados police managed to marshall persons appropriately. In Antigua, protesters were denied marching permissions, yet they still gathered in the city of St. John’s. While picketing doesn’t require permission from the police commissioner, street processions do. The reaction the Antiguan police had to protesters being in the streets of St. John’s was markedly different to that of Barbados. Antigua’s reaction was to use tear gas and rubber bullets which only inflamed and agitated protesters more.

Incumbent and opposition political leaders, in both St. Vincent and Antigua, have been seen to be taking snipes at each other in the wake of these violent turns in what started as peaceful protests. St. Vincent police are being ordered by the prime minister’s government to raid houses of persons, often of those in the opposition, for evidence of a conspiracy to hurt the prime minister. Antigua’s opposition is using the opportunity to point out flaws in Hon. Gaston Browne’s government. These are all politically fuelled actions as each political party is cognisant of elections and the need to get the public on their side while also thwarting the decisions and statements of the opposing party. All the while, as both countries point and wag fingers, the reputation of our islands as a peaceful destination comes under threat.

A threat to an already fragile economy

News of protests gone violent, especially if such protests escalate to more aggressive actions after the event, are large deterrents to visitors wanting to enjoy our shores. Dr Dalano Dasouza, an assistant lecturer of Economics at UWI Cave Hill in Barbados who originates from St. Vincent, cautions that with tourism just starting to pick back up across the islands of the Caribbean, we have to be careful not to turn off potential tourists from visiting our islands. Especially for a country like Antigua, which doesn’t have much of an agricultural back-up when the Tourism industry is depressed. Governments, therefore, run the risk of getting so caught up in their country’s politicking that they ignore the ramifications at a global level when it comes to sustaining their own economies.