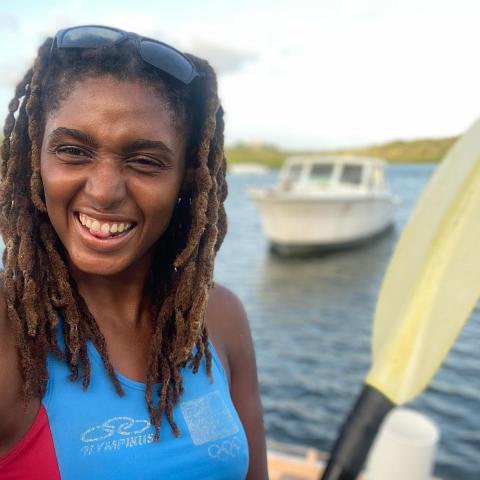 Christal Clashing is an aquatic adventurer. Born in Costa Rica, the adventure capital of Central America and raised in the Caribbean, Christal grew up with the ocean as her playground.

Her connection to the water and passion for water-based activities developed from an early age. Her family returned to Antigua when she was three, and at age five, she began taking swimming lessons at the beach. In addition to attending her own classes, she helped others in lower levels and pushed herself into more advanced classes. As a result, she quickly developed her skills and became one of the faster swimmers at eight. She was thirteen when she attended her first world championships in Barcelona in 2003.

Upon her return, she affirmed that she would participate in the Olympics. “It was my life goal since I was six,” said Christal.

Determined to turn her dreams into reality, Christal expressed the desire to go somewhere else to train. Her parents decided that living with her aunt in The Bahamas was the best option. In those three years, Christal finished high school and became the first female athlete to represent Antigua and Barbuda in swimming at the 2004 Summer Olympics in Athens. She went to another world championship in Montreal in 2005 and to the 2006 Commonwealth Games in Melbourne. During the Commonwealth Games, she met a volunteer coach from Australia who offered to train her. She later moved to Melbourne where she became a certified swim instructor and began training for the 2008 Beijing Olympics. However, due to some health issues she had to stop swimming.

She subsequently returned to Antigua, where she started volunteering and working as a swim instructor. Her volunteer work helped her gain a scholarship to the University of Portsmouth where she studied Sports Development as an undergraduate student. She then received a Master of Research in Science, Sports and Exercise Science. She later moved to Costa Rica and returned to Antigua at the end of 2017. 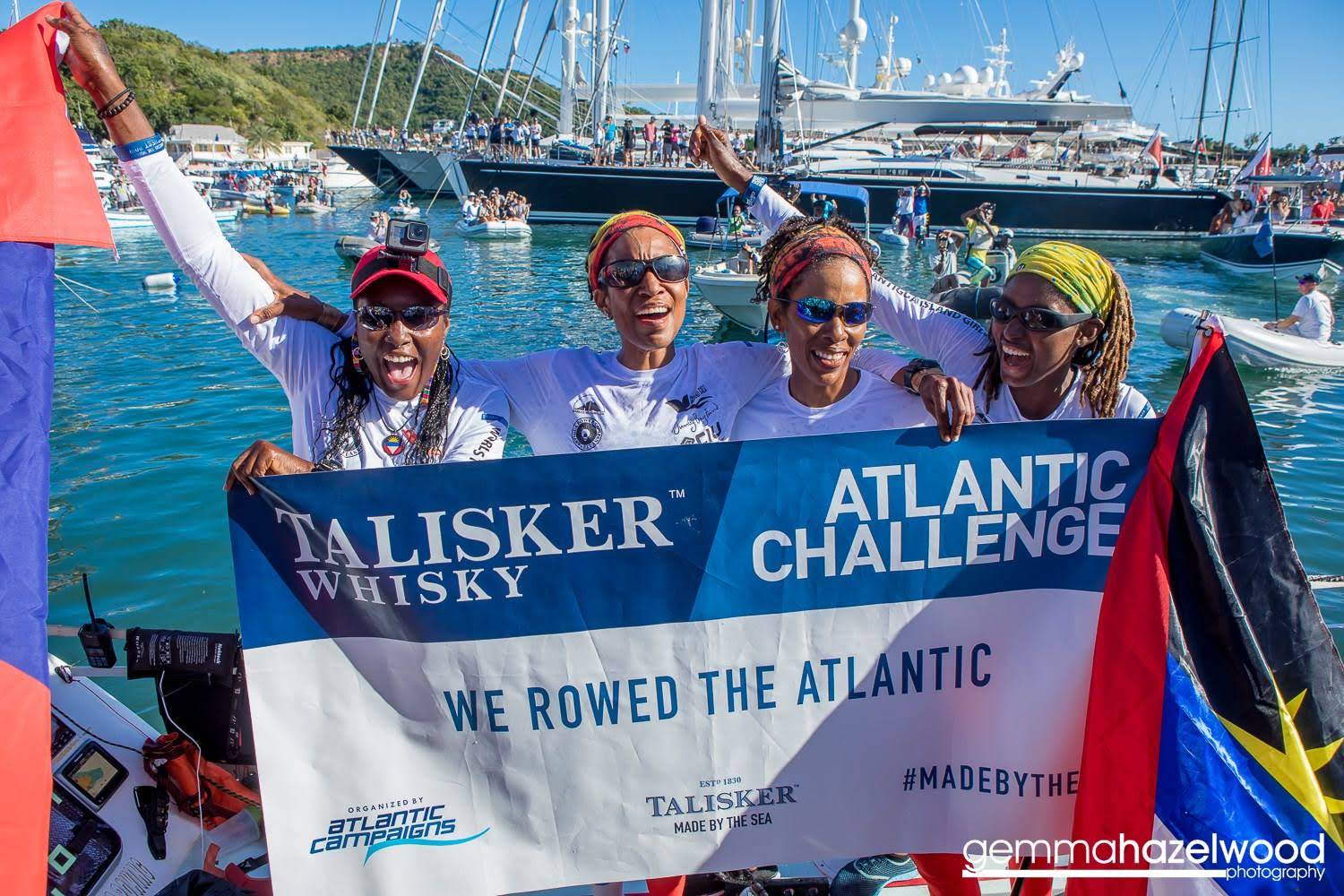 © Gemma Hazelwood
In early 2018, there was a national call to join Antigua’s first all-female rowing team. Christal was among a larger group of women who answered that call to participate in the Talisker Whiskey Atlantic Challenge. Four out of five women were selected, with the other serving as an alternate. Their journey began in December 2018 in La Gomera, Canary Islands and ended on their home soil. On January 28th, 2019, after rowing for 47 days, Team Antigua Island Girls became the first all-female and all-Black team to row across the Atlantic. After returning, Christal picked up freediving and hopes to set a national record in the future.

Since 2022, Christal has been working on her Ph.D. at Monash University in Australia. After observing the pandemic’s impact on tourism, Christal shifted from tourism and decided to get her Ph.D. in the field of Information Technology, more specifically related to designing technologies for water recreational activities. 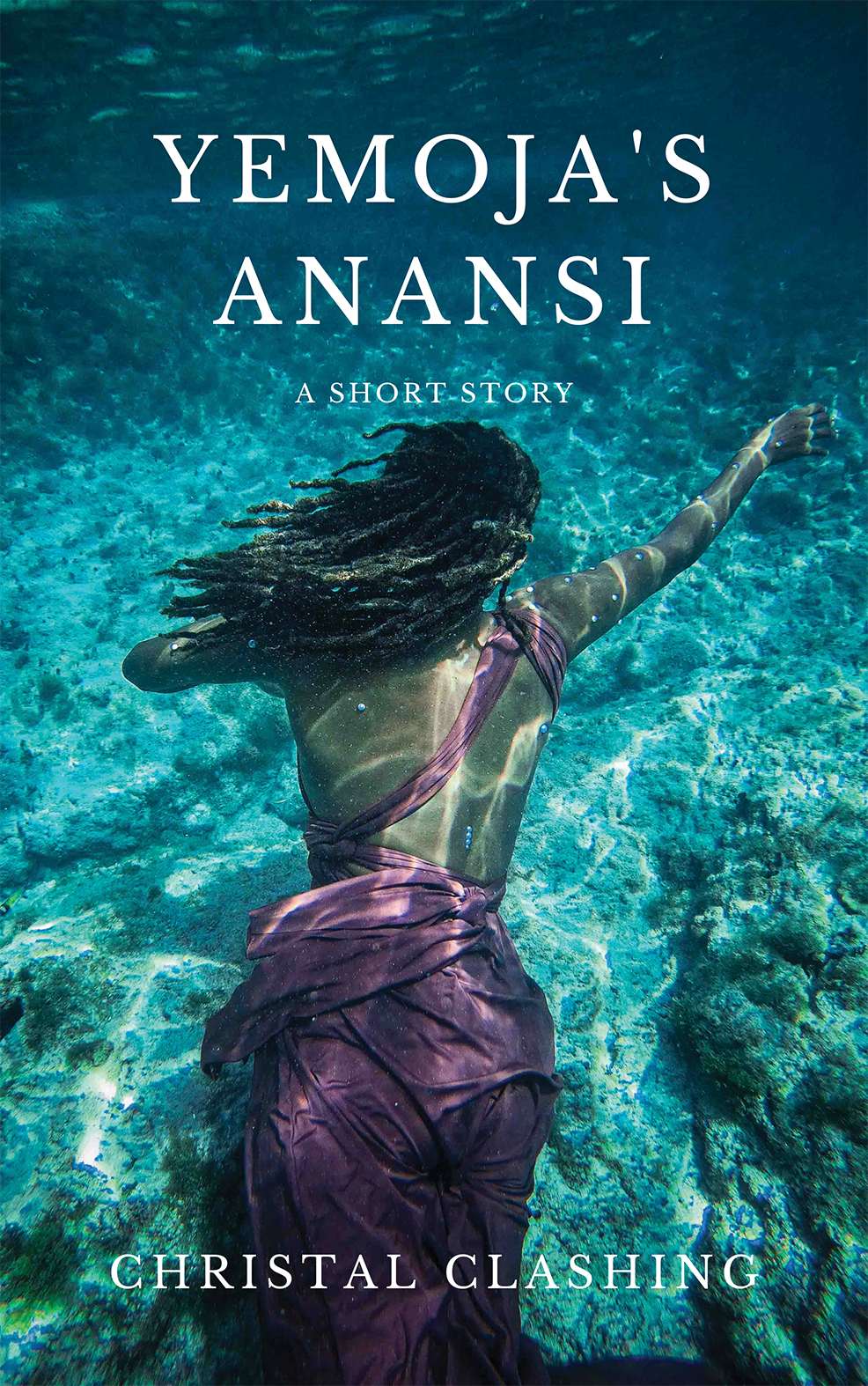 Christal is also an avid blogger, travel writer, and regular contributor to Commffest’s e-magazine. Earlier this year, she published a book called ‘Yemoja’s Anansi’. ‘Yemoja’s Anansi’ reimagines Yemoja, a water deity in the Yoruba religion, and Anansi, a Caribbean folktale character that derives from West Africa. Not only is she the author, but she is the model and creative director of this beautifully illustrated short story that is available on her website as an e-book. She is currently working on releasing a print version of this fictional interpretation that places ‘Yemoja’s Anansi’ within the context of the Middle Passage and the arrival of enslaved Africans to the Caribbean. Rowing across the Atlantic Ocean inspired Christal to write ‘Yemoja’s Anansi’. “I drew from my experience of crossing the Atlantic,” said Christal. It left an impression, “…knowing that we were crossing the same ocean as the transatlantic slave trade”.

Christal believes that folklore is an important mechanism to share our Caribbean culture and experiences. A dance interpretation of ‘Yemoja’s Anansi’ will be showcased at Commffest’s upcoming film and arts festival. This will feature dancer and choreographer Abi McCoy, sound by Darin Byron (DJ Riddim Master) and videography by Zea Wiltshire.