The Work of Kwame Delfish 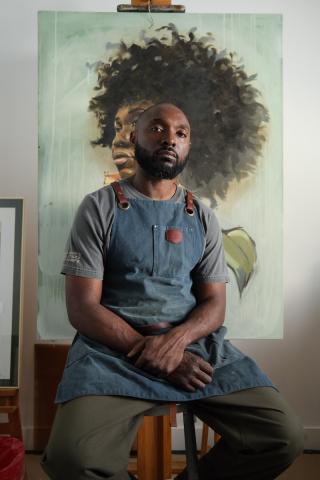 Kwame Delfish is a Toronto-based artist of Antiguan and Montserratian parentage. Caribbean culture is his foundation and plays an important role in his artistry. Learning to play the drums at a young age and travelling with various Afro-Caribbean dance groups in Toronto have had a significant influence on how he expresses himself artistically. As a result, he applies rhythm to all aspects of his work.

Kwame indicated that he got into the commercial art world through a friend who had already worked in a number of commercial gallery spaces. Through his lead, he was able to become adventurous and participate in shows that he could never have imagined. As an artist, Kwame is constantly overcoming challenges by pushing the envelope and staying true to himself.

“I think it’s cool to document what’s happening in the world in your work… I’m not gonna say I’m heavily documenting political issues and world issues in my work, but it’s more like how those issues may affect me or affect me at that time,” said Kwame. He created a piece to celebrate Barack Obama’s victory in the 2008 United States presidential election. “That was just because of my understanding of politics at that time, he was the first politician that kind of made sense… it allowed me to, and inspired me to, create this piece… and that’s an example of it happening organically”.

Working with the Royal Canadian Mint 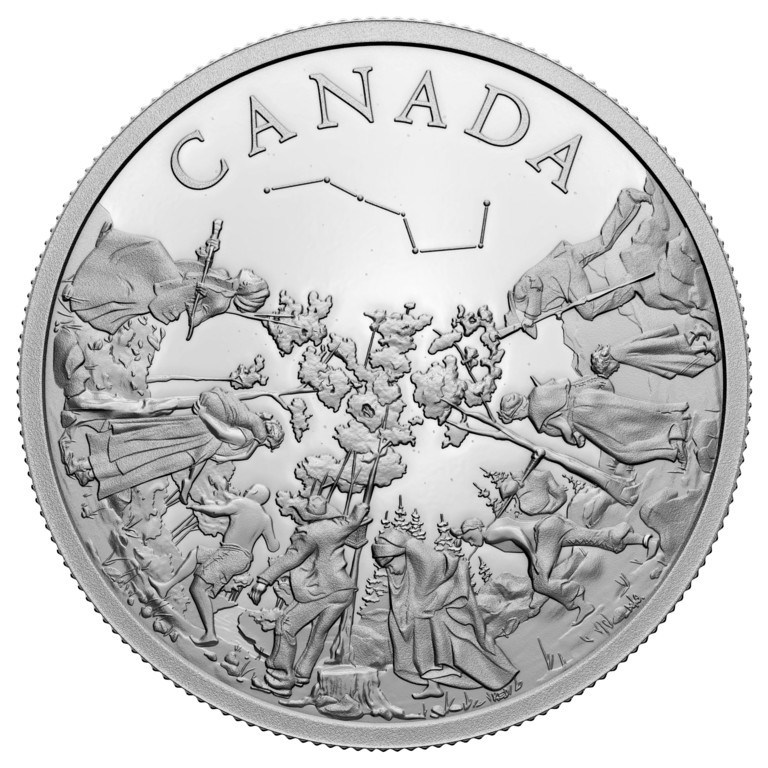 In 2015, Kwame designed his first coin with the Royal Canadian Mint, incorporating a maple leaf which represents a stylized map of Canada and important Canadian symbols. In 2022, the Mint revealed Kwame’s second silver coin which was launched in commemoration of Black History Month. The 2022 Underground Railroad coin pays homage to the enslaved people of African descent who fled to Canada and risked their lives for freedom. According to Kwame, the story of the Underground Railroad is important and dense, with many stories within the stories. In doing his research, he realized that many elements were present to make the Underground Railroad possible and successful. In addition to this, he pointed out that everyone, including Hollywood, has a different interpretation of what happened and how it happened. His vision was to capture a different perspective of a story that has been told many times. For the design, Kwame portrays a group of individuals travelling together and holding each other up as a unit for one purpose.

According to Kwame, regarding the process, “It’s like any other painting. The real difference is that you’re viewing it so small.” It required a lot of zooming in and out to ensure perfect spacing and that the design could stand on its own. “I was able to give them a design that really stood out and hopefully will be remembered for a long time,” he said.

As a multi-faceted artist, Kwame does not confine himself to any single medium. In addition to painting, he is skilled in hair design, photography, and storytelling. "The blakBrush is something I came up with over the pandemic. I felt like I needed a platform to display some of the content that I was creating and feeling and document that.”

This content was based on the years he spent as a barber. Kwame believes that Black hair ties into so many different things and that community brings up so many different conversations. "I felt like it can be me free as an artist and just telling those stories," said Kwame.

For Kwame, the blakBrush has kept him focused as an artist and serves as a creative outlet. On another hand, it has expanded to how barbers and hairstylists affect the Black community and provide spaces for opportunities for the community. "It's a hub for a lot of us, and that was the culture and is the culture... still to this day a lot of these spaces are meeting places and community courts,” he said.

Kwame emphasized that the blakBrush is a space for himself and others to make a change in their community from a creative place. He and other individuals have been able to work on creative jobs that are affecting the community. This includes creating spaces where they can and curating discussions with different groups including youth and elders in the community.

According to Kwame, "We need more Black representation across the landscape of Toronto. With the blakBrush, we can effect change the same way a barber or hairstylist can effect change in an individual. Having stood up in that spot, in those salons and spaces for so many years, I now get to do the same thing creatively and continue to have lessons and learnings from those spaces."