The Pivot.Envisioning a technologically empowered Caribbean In April 2021 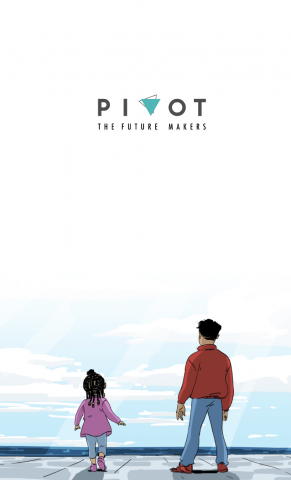 written by:
By Christal Clashing

Envisioning a technologically empowered Caribbean In April 2021, the Inter Development Bank (IDB) alongside the Caribbean Climate-Smart Accelerator, the Singularity University and The Destination experience released an ebook on the Caribbean Pivot website that captures the imagination of a future Caribbean. They coopted some of the regions promising illustrators to capture the essence of a vision of a technologically empowered Caribbean twenty years in the future. Nine moonshot stories were captured following a convocation of Caribbean minds at the Pivot Event in October 2020. If you’re wondering what a moonshot story is, that’s perfectly normal as this concept had to be introduced to the participants of the think-tank like meeting held virtually in the midst of the global COVID-19 pandemic.

A moonshot idea can be described as a radically ambitious idea. A moonshot story illustrates such an idea with graphics and words, as Caribbean Pivot did with their graphic ebook called the Pivot Book, found on their website. The Pivot Event, the brainchild of the Caribbean arm of the IDB, was scheduled to happen at a physical location in 2020 but with the pandemic, plans had to change. That change was probably for the better as more persons around the region were able to participate virtually. Put together in small working groups, experts and practitioners across a range of fields and disciplines went to work envisioning what the Caribbean region could look like in 2040.

The power of green energy

A key theme emerging from the working groups was the use of green energy to power our homes, businesses and transport.  Envisioning a water-based craft that can hold at least 250 persons at a time and that can travel the length of the Caribbean in six hours was one of the highlights of the Pivot Event and a key feature in the graphic ebook. Such a craft, called ‘Sea Wee’ after the play on words of the regional airline,  BWIA’s affectionate name ’Bee Wee’, would be powered by green hydrogen. Green hydrogen is the conversion of water into hydrogen whose splitting of atoms via electrolysis can generate enough power to transform transportation as we know it.

The preservation of our cultural festivals

With the world going virtual, it was envisioned that even with technological advances we will still preserve our culture which includes our love of Soca music and Carnival celebrations. As we are already seeing happen through the wide use of platforms like Zoom, the ability to enjoy celebrations virtually is useful for those who cannot be all in the same physical location. The Pivot Event envisioned that our cultural festivals would be streamed to our diaspora and more, wherever they are in the world so they can enjoy festivals like Barbados’ Cropover from the comfort of their own homes.

For many islands in the region, their peak cultural festivals fall over the summer months, which also coincides with the hurricane season. With the increase in hurricane intensity and frequency over the last few years and with predictions that it may get worse each year, the Pivot Event participants made sure to address this topic as well. They visualised climate-resilient pods that act as shelters and a form of transport that hold families of 4 or 5 safely during the worse part of a storm. Clean up efforts will be so synchronised that it would only take a few days post-storm for the island to bounce back to normal life.

Each of the visions is expected to come about through the strategic use of data from Caribbean citizens and historical data from previous events. Through a mixture of Artificial Intelligence and blockchain technology, the privacy of citizens would be assured while social and computer scientists work together to predict and simulate opportunities and threats to the Caribbean way of life so that they are prepared to respond to either. If you want to see the moonshot visions for yourself you can view the ebook at Caribbean Pivot.